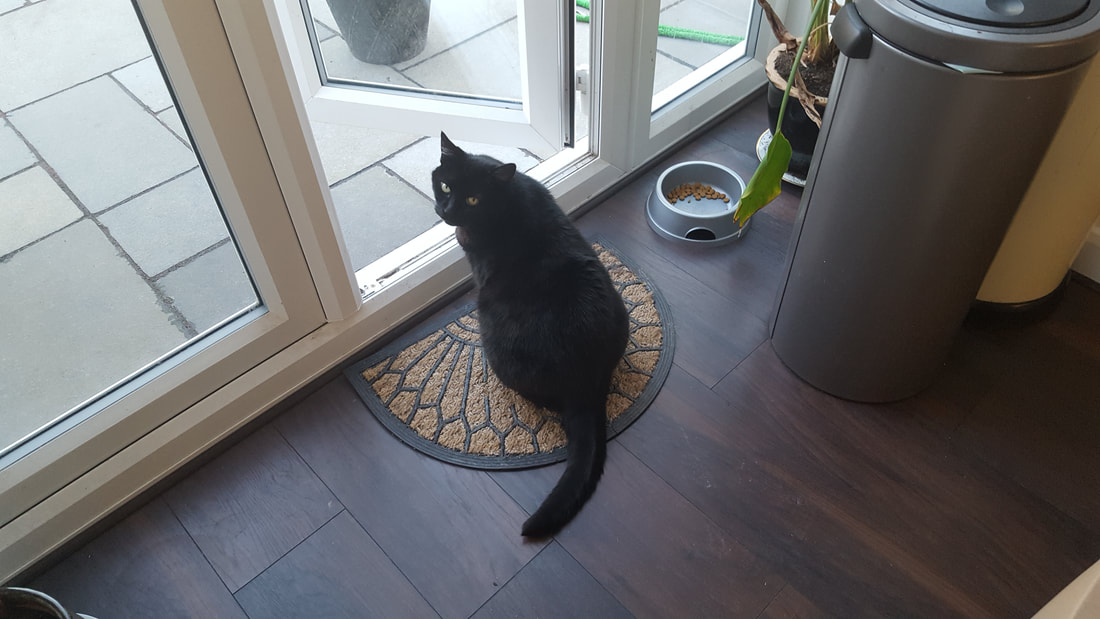 Boy is an elderly but friendly old man who will also be your friend whether you like it or not. Boy likes to lick things. He will lick himself, other cats, you, anyone else he can reach and has been spotted licking the furniture when he thought no-one was watching. It has been discovered that if you scratch him just above his tail while he is licking he will lick faster. Boy's nickname is "puppy" because he wags his tail constantly, even in his sleep. If you think that's a bit strange, you are correct. It is strange.
Likes: Licking things, making new friends, food.
Dislikes: Lack of licking options, dieting.
Duck 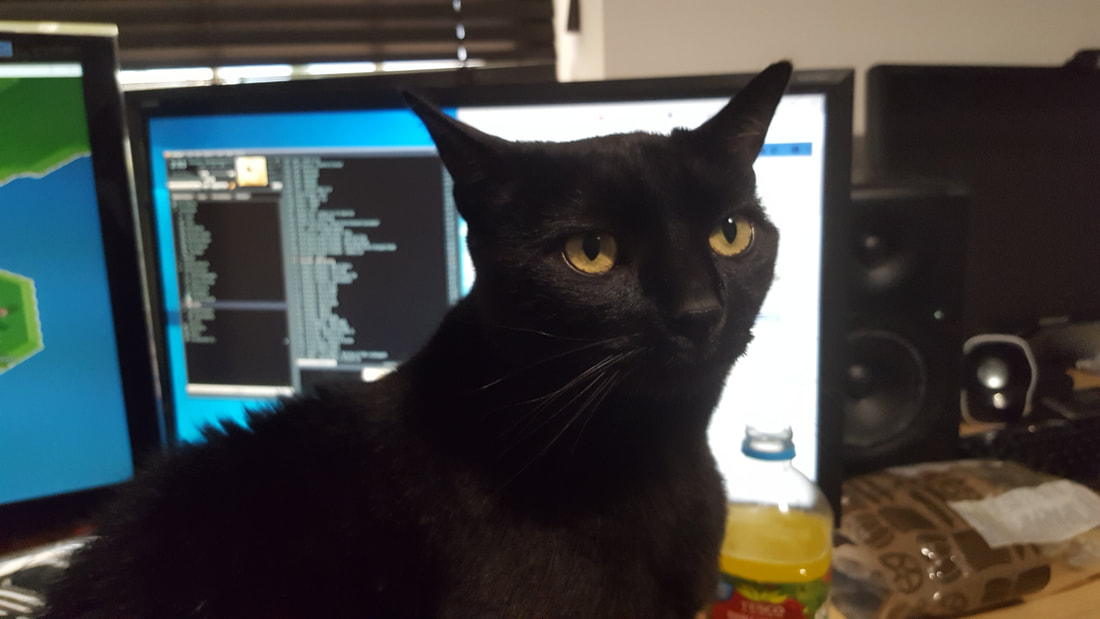 Hello, I'm Duck. Love me. Now. No, no, no, stop whatever you're doing and love me immediately. Delay is not acceptable, for I am Duck, Empress of all things and needer of love RIGHT NOW. Also food. Feed me. No, not the cat food, I want whatever you're having. Yes I know I don't like aubergines, but I want them on principle because they're on your plate and not on the floor in front of me, which is where all food belongs. Also while you were reading that paragraph you were not paying enough attention to me. Unacceptable.
Likes: Love, attention, food, snoring
Dislikes: pretty much everything else
Pookah 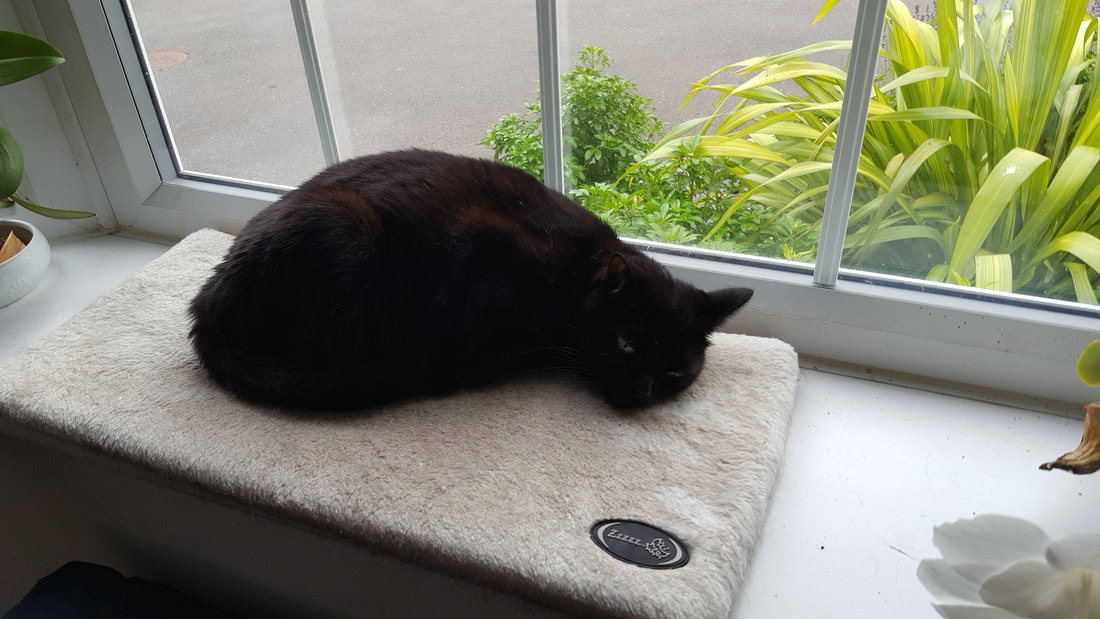 Pookah is all business, all the time, as you can see in the picture. But she is in fact earning a well-deserved rest from the many tasks she performs for the studios. For instance, James and Katrin seem to be absolutely useless at catching small rodents, as are the other cats (Duck, her embarrassing sister, threw herself at a butterfly once but missed), so she has to murder enough wildlife for six people, which is exhausting as you can see. Also, James insists on using electrical equipment which has been neither sniffed nor rubbed up against, so Pookah also performs these vital tasks, and asks nothing in return other than immediate attention at no notice any time she feels like it, and being dried with a tea towel whenever her hunts lead her into thunderstorms, which is often.
Likes: Catnip, Cold-blooded murder, sleep. In that order.
Dislikes: Useless humans who fail to sniff their own guitars
Beelzebub 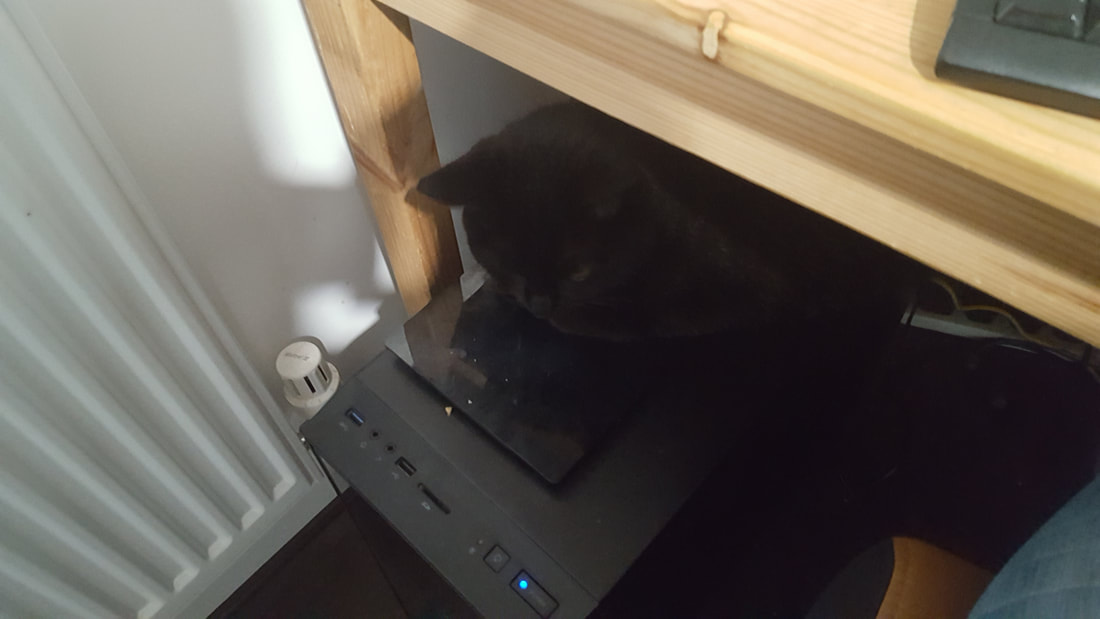 As befits a cat named after the Crown Prince of Hell and the Guardian of the Ninth Gate, Beelzebub is shy, tiny, friendly and loves cuddles. She is more usually nicknamed "Bib", partly because she has a small patch of white fur on her chest, but mostly because repeatedly yelling "Beelzebub!" out of your kitchen door in the middle of the night is likely to get you put on some sort of list (or maybe just a credit on the next Ghost album). As can be seen here, she likes to sit on top of computer towers. She particularly likes to press the power button when you're in the middle of something, which happened about 2 minutes after this picture was taken.
Likes: Cuddles, warms
Dislikes: Strangers, being moved when she's comfy